Visual Arts: paintings
As it has been argued in this essay, thus far, Western perception of Islam derives from the collective memory, which had been constructed and over the years cultivated by various components of the discourse. I claim, however, that none other factor influenced Western cognition of Islam more than the visual arts. Art due to its ability to arouse the imagination and capture the attention in a considerable way affects human consciousness. Art always transmits a particular point of view which can have a radical impact on emotions and reasoning process. More significantly, however, according to Ray Pratt “art has a political power that can support the status quo, act as a safety valve for discontent, and therefore benefit the oppressor (…)”1 Indeed, 19th century art descendant from the European colonialism had a political purpose par excellence. Together with the new field of studies named Orientalism it was employed as an instrument of control:” As a mode for defining the presumed cultural inferiority of the Islamic Orient, (…), part of the vast control mechanism of colonialism, designed to justify and to perpetuate European dominance.”2 In this particular case, art is not virtually understood as an element of control over human body or material goods, but rather over the mind. Meaning, popular paintings from the period produced and later manifolded certain image of Islam, thereby, influencing recipients perception of the painting. In a sense these images “took control” over the mind as they influence it emotions and reasoning process. Said pointed out, furthermore, that the painting’s agenda was even more compelling as it was a part of the dominant framework of beliefs, while the alternative source of knowledge did not exist:” (…) the hegemony of European ideas about the Orient, themselves reiterating European superiority over Oriental backwardness, usually overriding the possibility that a more independent, or more skeptical, thinker might have had different views on the matter.”3

Paintings of Jean-Léon Gérôme who is, perhaps, one of the best known painter of the period should explicitly illustrate the aforementioned assertion. Gérôme in his work transferred various stereotypes about the Muslim world. These suppositions a priori accepted, became the absolute truths and for many the only way of understanding Islam. What is more, the message contained in these paintings reflect the 19th century perception of Islam. As an example of the commonly established attitude towards Islam in the 19th century Europe, I would like to look more closely at two paintings: The Snake Charmer and The Slave Market.

The Snake Charmer had been painted around 1870. The painting strongly stimulates recipients imagination. Everything in the painting appears to be mysterious; starting with the color of the wall covered in Islamic flower motifs and Arabic writing and finishing on the group of men sit on the ground watching a nude snake charmer. At first glance it seems that the Oriental world had been depicted with precision and with strong attention to details. Gérôme’s attempt to appear as much factual as possible, has a particular function, it “ tries to make us forget that his art is really art (…)”4And, indeed Gérôme’s paintings were considered as facts rather than fictions. However, there is nothing more wrong to assume so. Going after Plato’s claim that the artist is not able to present the true nature of things, I argue that Gérôme’s ‘The Snake Charmer’ has a fictional character:” The artist’s representation is therefore a long way removed from truth, and he is able to reproduce everything because he never penetrates beneath the superficial appearance of anything. For example, a painter can paint a portrait of a shoemaker or a carpenter or any other craftsman, without knowing anything about their crafts at all; yet, if he is skillful enough, his portrait of a carpenter may, (…) deceive children or simple people into thinking it is a real carpenter.”1 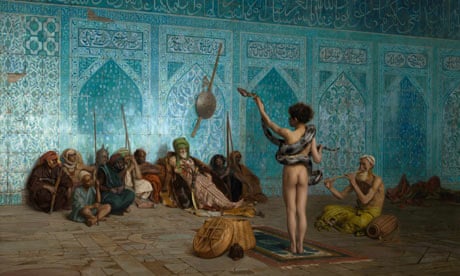 Gérôme’s representation of Islam is precisely one of deception and untruth. ‘The Snake Charmer’ depicts Islam as a place of barbarity and backwardness. The observer has a feeling that the group of men and the snake charmer have been in this position for centuries, regardless of the historical changes taking place in the Middle East:” Gérôme suggests that this Oriental world is a world without change, a world of timeless, atemporary customs and rituals, untouched by the historical change (…)”2 Another striking feature of the painting is its focus on the sexuality. The naked boy who is wrapped with a phallic python equates the sexual perversity of the Orient. This image contains one aspect of particular interest, that is the “sexual barbarity”, as it suggest the possibility of homosexual intercourse.

The aspect of Oriental sexuality had been a very popular theme of the Oriental art. Obviously it was strongly interconnected with the topic of women in the Muslim World, which had been touched upon by different painters from the period, for instance, by Eugene Delacroix “The Women of Algiers” or Henri Matisse “Moorish Woman with Upheld Arms”. These painters constructed a particular image of a Muslim woman which is still alive in the Western consciousness.

As an example the essay takes another painting of Jean-Lon Gérôme, ‘The Slave Market’: The message of the painting is very direct. Depictions of a slave market and a naked woman which is about to be sold, indicates Muslim disregard for women’s right. Gérôme’s fantasy became so strongly idealized over the years that the alleged assumption about the inferiority of women in Islam is perceived as a fact. Up to this day, the prevailing opinion in the West is, that men in Islam have a total control over women The painting indicates, furthermore, the barbarity of the whole procedure. For the European of 19th century it was unimaginable to sell a woman like an animal on the market. The author speaks for it himself:” Don’t think that I or any other right-thinking Frenchman would ever be involved in this sort of thing. I am merely taking careful note of the fact that less enlightenment races indulge in the trade in naked women”1

These paintings strongly supported notions of Western superiority and Eastern inferiority through their methods of simplification. Instead of portraying the East accurately, and including heterogeneous aspects of the lifestyles, cultures, and peoples, the portrayal is distilled into stereotypical images. Homogeneous notions of sexual perversity and social irresponsibility served to justify the West’s belief that the East was in need of colonization and occupation:” (…) Orientalist painting managed to body forth two ideological assumptions about power: one about men’s power over women; the other about white men’s superiority to, hence justifiable control over, inferior, darker races, precisely those who indulge in this regrettably lascivious commerce.”2

The city of Warsaw is burning (part 2)